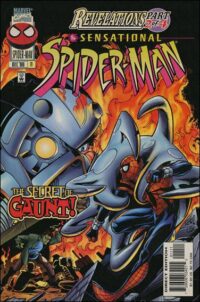 “Deadly Diversions” Revelations Part 2 of 4. Script by Todd Dezago. Pencils by Mike Wieringo. Inks by Richard Case. Cover by Mike Wieringo and Richard Case. Story continues from Spectacular Spider-Man 240. The second clone saga is nearing its crescendo! And many lives will be changed and ruined in its terrible wake! The evil mastermind behind the entire clone ordeal orders Gaunt to kill Spider-Man! So Gaunt (aka Mendel Stromm) sets a trap for the web-slinger (aka Ben Reilly) and Peter Parker inside a rundown building! While the battle rages against the Robot Master, Mary Jane goes into labor at the Daily Grind! Oh no, the former wall-crawler is caught between a rock and a hard place! Should he abandon Ben and rush to his wife’s side? Or stay and fight Gaunt? Story continues in Amazing Spider-Man 418. Cameo appearances by Anna Watson, Alison Mongrain, J. Jonah Jameson, Joe Robertson, Arthur Stacy, Glory Grant, Flash Thompson, and Betty Brant. (Notes: This issue includes a 2-page tribute to Marvel writer and editor Mark Gruenwald. This issue also includes a 4-page preview of the new Deadpool (1997) series. This story was reprinted in 1997 in the trade paperback: Spider-Man Revelations; and again in 2012 in the trade paperback: Amazing Spider-Man The Complete Ben Reilly Epic #6. This issue is not the polybagged promo edition with the $6.99 cover price.)