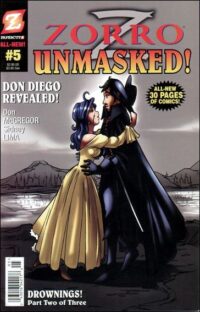 by Don McGregor & Sidney Lima Papercutz presents ? Zorro unmasked! Eulalia Bandini has been on the run with Zorro for some time, how could she not learn his greatest secret or fall in love with Zorro? Yet there are furious events along the Yellowstone River, as Zorro and Eulalia ride headlong into a violent conflict between two young lovers on the run, Malena Fellini and Burt Douglas, and Dennis Scorched, the violent, wealthy man who caused Malena to flee from New Orleans. Plus our heroes encounter a shocking act of racism toward Red Lightning, a Shoshone Indian, and risk their lives down a deadly waterfall!