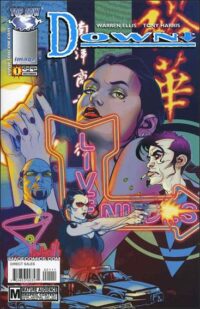 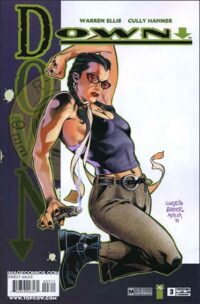 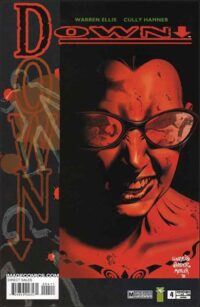 *(W) Warren Ellis (Art) Tony Harris (Col) J.D. Mettler (Cov) Tony Harris. Five years ago, a narcotics cop was sent undercover, down into the criminal substructure of the city. He never came back. He went native. Five years later, he’s running the city’s prime drug gang. Today, a second cop, Detective Deena Ransome, in the midst of career flameout, is sent undercover with orders to pull the first one out?In a body bag if necessary. But when she finally reaches down far enough to confront her target, does she kill him where he stands? Or does she take his place? Fast-paced action and thrilling crime noir is brought to you from the award-winning Warren Ellis in this landmark limited series! Down is as gritty and hard hitting as any of Ellis’ crime stories. The story follows quick tempered narcotics undercover cop Deanna Ransome. After her latest bust goes poorly Deanna is offered one last chance to be an undercover agent. This is one of those books that is not for everyone. It’s very violent and deals with a lot of unlikable characters. But if you’re a fan of gritty crime stories like 100 Bullets, you’ll dig Down.