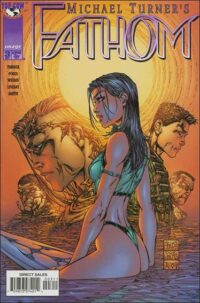 Cover pencils by Michael Turner, inks by Joe Weems. Untitled story, script by Michael Turner and Bill O’Neil, pencils by Michael Turner and Keu Cha (assistant), inks by Joe Weems, John Livesay, Jason Gorder, Danny Miki, Jonathan Sibal and Marco Galli (assistant); Aspen is treated in Hawaii after being rescued from the ocean and the doctors find that her physiognomy is different from that of a normal human; Chance is blasted by Maylander for firing the missile that destroyed the Deep Marine Discovery research station; Killian sends his people to attack installations of the surface world; Chance tracks down Aspen and apologizes for the damage he has done.