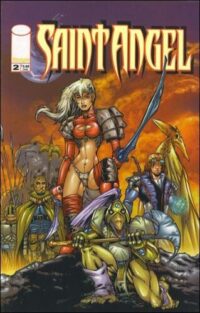 (W) Robert Napton (A/W) Karl Altstaetter (I) Victor Olazaba/  In a distant galaxy, on an alien world, floating island nations fight endlessly in bloody conflicts. Picking up where last issue left off, Jonn and Talon become embroiled in a terrible battle against the vicious Markeen. During the conflict, Jonn is mortally injured but is miraculously saved by the mythic warrior – Saint Angel. As his wounds mend, Jonn learns horrible secrets about the Markeen and their quest to destroy all the great island nations. In the same issue, in a flip book format. DEITY: NIGHT ON THE EDGE, part two. This one-shot independent story continues as Jamie gets more than she bargained for when she enters the notorious Club Underworld!