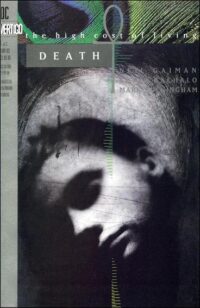 She is Dream’s elder sister, the one who will end the Endless – the one who closes up the Universe when Destiny reads the last word on the last page of his book. She is Death. There is a rumor that on one day of every century, Death clothes herself in mortal flesh and walks among the living. It is, they say, the price she pays for being the one who separates all that came before from all that will continue. It turns out that this rumor is true. This century, Death comes to New York. Written by Neil Gaiman, with art by Chris Bachalo and Mark Buckingham, and colors by Steve Oliff. Cover by Dave McKean with an added fifth metallic color.