Skip to content
View cart “Strain Night Eternal 10 (2014)” has been added to your cart.
OUT OF STOCK 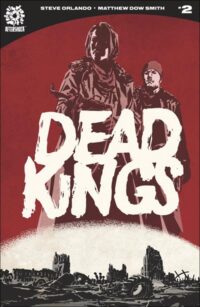 Written by Steve Orlando. Art and Cover by Matthew Dow Smith. FOLKLORE…WRITTEN IN OIL AND IRON! Sasha Vasnetsov would do anything to free his brother Gena from a work camp for the socially degenerate, including using a suicide bomb hidden in the last place any man would look. Sasha didn’t want to use it. He wanted to use Maria Kamenaya, a warrior from a bygone apocalypse. Too bad she’s more interested in flesh: eating it or laying with it, depending on the source. Sasha’s on his own, out of luck, on a one-way trip…to the wrong detention camp. ????. Am I right? From Steve Orlando (Batman/Shadow, Crude, Midnighter, Virgil) and Matthew Dow Smith (October Girl, Suicide Squad, X-Files) comes a vision of humanity after a disastrous World War of Mechs and Magic.