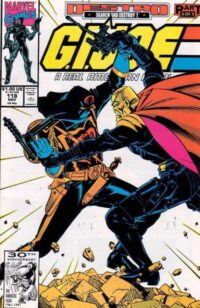 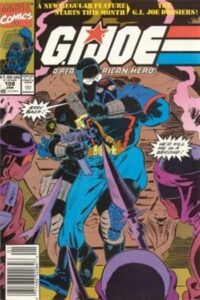 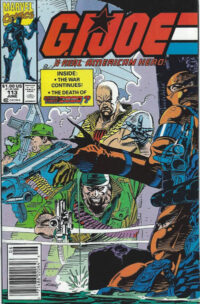 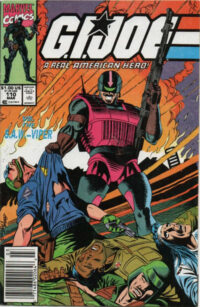 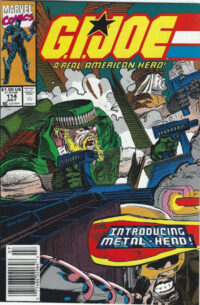 #108 – *Snake-Eyes–face to face with Cobra Commander. Beginning a mission from which some Joes will not return. “Apparent Conclusions” is written by Larry Hama, with art by Mark Bright and Randy Emberlin. Also beginning the G.I. Joe Dossiers with Snake-Eyes (as drawn by Andy Kubert) and Cobra Commander (drawn by Neal Adams). Cover by Bryan Hitch.

#110 – *In the aftermath of terrible losses, the Joes face a worsening Middle East situation, and Cobra Commander continues his own offensive at home. “Escalator to Armageddon” is written by Larry Hama, with art by Ron Garney and Fred Fredericks. Plus: a Lady Jaye dossier drawn by Michael Golden. Cover by Ron Garney and Bob McLeod.

#114 – *”Metal-Head!” As the Battle of Benzheen comes to a head, a group of Joes face off vs. a new Cobra ally, Metal-Head, who proceeds to make quick work of three Joe vehicles. Before he can be apprehended by the angry Joes, a call to cease hostilities goes out on both sides as the Emir was forced in a secret meeting in a neutral country with Cobra Commander to ally himself with Cobra. Characters: G.I. Joe [Salvo; Rock N Roll; Dusty; Hot Seat; Steeler]; Cobra [Iron Grenadiers [Metal-Head]]. Written by Larry Hama, with art by John Statema and Randy Emberlin. Plus: a Flint dossier drawn by Michael Golden. Cover pencils by Andy Kubert.

#118 – *DESTRO: SEARCH AND DESTROY! Part 3 of 3. This is it–the showdown between Cobra Commander and Destro! Who will live? “Deceptions & Diversions” is written by Larry Hama, with art by Rod Whigham and Randy Emberlin. Plus: a Spirit dossier. Cover by Michael Golden.