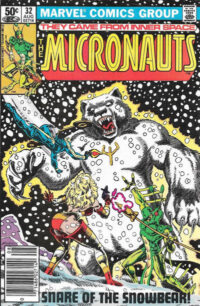 Cover art by Pat Broderick. “Snowblind,” script by Bill Mantlo, pencils by Pat Broderick, inks by Danny Bulanadi; The Micronauts are off to find the second key to restore the Enigma Force and divert the disaster that looms over the Microverse; They travel to the snow covered zone of Subzero; The Prince of Subzero, Prince Peacock is hunting the Snowbear, not any snowbear but the one that carries the symbol on its chest of the second key; The legend has it, that the slaying of the snowbear will save the kingdom, but the slayer will lose the thing which they hold most dear. “Wonders of Nature” Hostess Fruit Pies ad featuring the Fantastic Four.