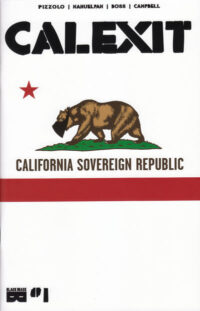 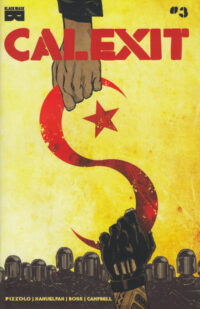 *Written by Matt Pizzolo. Art and Covers by Amancay Nahuelpan. What if a fascist, autocratic President took over the United States? And what if that President lost California, the sixth largest economy on Earth, by nearly 2-to-1…a margin of almost 3 1/2 million votes? What if the day after that President took power, the largest mass demonstration in history occurred, and the state with the largest turnout was California. And then, the following week, two of the largest international airports in the world, California’s LAX and SFO, were blockaded by protesters? What if California refused to be ruled? ‘The tree of liberty must be refrshed from time to time with the blood of patriots and tyrants.’ Zora and Jamil are faced with some harsh choices, a few roid raging Neo-Nazis, & not much water…But Disneyland has churro ice cream sandwiches so it’s kinda all worth it. California Über Alles. 48 pages